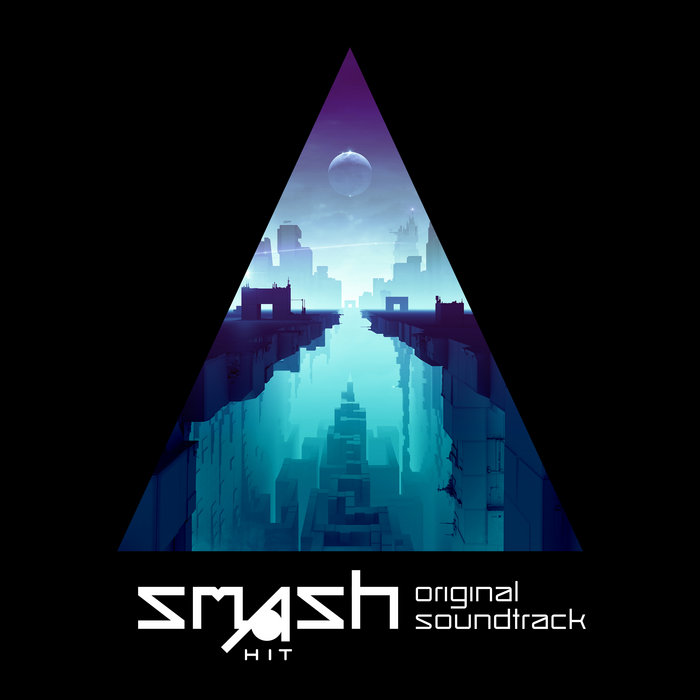 Xubiod it's the soundtrack to the game "break stuff get points"

... I downloaded Smash Hit on the Gear VR and it is by far one of the best games I've ever played on that platform. Not only that, but the music in this game was so good and accompanied the game really well. As a standalone album, it is a great set of upbeat tracks you can chillout to. Favorite track: Part 2.

Sky Fantastic music for a fantastic game. Fairly quick to lose myself in the journey. Favorite track: Part 8.

Jesper The game was really good and I think this is mostly because of the soundtrack. The visuals and sounds work really well together. Favorite track: Part 2.

Bowzertyui This music transports me in another world. Favorite track: All parts mixed.

Official soundtrack from the game Smash Hit, by Mediocre Games. Available for iOS and Android devices.

All songs written by Douglas Holmquist.

Writing the music for Smash Hit was probably the most challenging of all the games i’ve worked on with Mediocre. And in the end definitely the most rewarding. Because of the enormous reach of the game, my music has been heard by millions of people that would have never heard it if it wasn’t in a game. A game that, thankfully, lived up to it’s name and became quite a smash hit indeed. And i’d like to think that the fact that we really worked hard on getting the music and sound design to fit the game really paid off too. I’m very happy all for the kind words I’ve received through e-mails, bandcamp, soundcloud and other places. And equally humbled by album downloads, spontaneous remixes, and questions from fellow producers regarding the inception of the music. So I thought I’d write a little something about that.

Dennis and Henrik started working on what would become Smash Hit sometime during the fall of 2012, and I joined in sometime in January 2013. They knew right from the start that they wanted the music to be electronic, and that the style of the game would differ a lot from earlier Mediocre games. It took a while while for me to find the right style, partly because of the fact that we worked on Sprinkle Islands at the same time, and partly because Dennis and Henrik were quite particular about the music. Something I’m very thankful for, cause their feedback, ideas, references and the discussions we had made it all so much better in the end.

I did the first couple of sketches in February. They were based around heavily processed drums, some ambient synth chords and some melodic arpeggio stuff. Dennis had suggested that the music should be divided into 24 second parts in 120 bpm, and that all parts should be able to be played in any order and still make musical sense. I tweaked the sketches for a bit, but then we decided (thankfully!) to move on in an another direction. Dennis and Henrik presented a couple of reference tracks, (Shigeto - Look at all the Smiling Faces, Gold Panda - Fifth Ave, Robot Koch - Water and Solutions, to name a few) that all had features they wanted for the music, big sounding spacey reverb, interesting drum programming, warm analog sounding sampled beats, a bit of static, and some heavier beats and analog synth stuff as well. After a while I presented a second batch of ideas, and this time we all felt that we were going somewhere, and I still think that there are som really nice ideas in there. After that, some time in March, I put the Smash hit music on hold, and focused on finishing Sprinkle Islands.

I picked it up again after the summer, and the visual style of the game had really started to fall into place. Here was this beautiful, clean, sci-fi aesthetic that needed a soundscape to match the way it looked. Even though we all liked some of the elements from the last couple of sketches, I started over and came up with the minimalistic ambient track that later became the beginning of the track Start. By now the music was ordered in sections of 32 seconds, with 2 second intros and outros that made the mixing (all done in Dennis’s custom built software mixer) between sections smoother, and the transitions more interesting. Musically, I moved away from the sampled sounding beats, the fuzzy warm analog synths and the static, and developed a brighter, cleaner, slightly more digital sound. I have been working in Logic for a number of years, and during the summer a new version, Logic Pro X, had been released. I really love the feeling of how new instruments, new software, new speakers or whatever, can give you instant ideas, and make you want to experiment. In this particular case, I really fell in love with the Retro Synth, that while emulating an analog synth still was so much cleaner than my beloved Moog, Roland and Korg analogs that I had used for the sketches I made in March. So Logic X’s Retro Synth became the foundation for the Smash Hit sound. I also used the arpeggiator and the ring shifter a lot. For drums, I started putting together a drum machine pallet consisting of some of the sounds from Ultrabeats’ Retro Machines and some 808-like tom and conga sounds that I made with the Retro Synth. I put some ring shifter on some of the shaker and hi hat sounds to get that stuttering drum sound that Everything But the Girl used a lot ion Walking Wounded, and that sounds soooo nice with a big reverb… I then stuck to this rather limited drum pallet (which the exception of the Korg Volca Beats that I bought near the end of the production and used in a few places) to get a coherent sound. With the unlimited drum samples available in today’s music software, it’s easy to get lost just browsing for cool sounds, instead of developing something that gives the music a sense of one-ness. A lot of people have asked me whether the beginning of Start is influenced by Boards of Canada. As much as I love them, and as much as they’ve probably influenced me on different levels, in this particular case I have to say that the inspiration comes more from the track Televised Green Smoke by Carl Craig. I love the sweeping ambient synths, the 808 toms and the hi-passed squeaky arpeggio, and the overall sci-fi cleanliness of the track. And I think all of those elements are present in different parts of the Smash Hit soundtrack.

The fact that I’ve mentioned two tracks from the 90’s as inspiration and the fact that two of my most used instruments have the word ”Retro” in them is probably significant. While I wanted the soundtrack to feel sci-fi and modern and clean, I still wanted some sense of nostalgia in the music. And Dennis and Henrik were on the same path with the look of the game. Tron (and Tron Legacy) was referred to quite bit.

Once I hade gotten the first few 32 second pieces of music together, and gotten thumbs up from the Mediocre guys, the production of the music accelerated fast, and by the end of the year I had about 30 pieces ready. I worked on the sound design - the breaking glass, the ball sounds and so on - in parallel with the music the whole time. After the holidays, I made another couple of pieces and the menu music, and did some tweaking to the previous bits.

My first idea for the menu music was to have something extremely sparse, almost just a low noice and som very subtle sound effects and synth sounds, so that there would be a huge contrast to the in game experience. But after trying that out we realized it felt kind of boring… So I wrote some menu music based on sounds I had used in the in game music, but made very sure to set it in a different tempo than the in game music (which is all 120) to set it apart in that way. I also wanted the menu track to have both the rhythmic and ambient qualities of the level music, albeit being a bit more free rhythmically.

The game was released in February and by then it had 33 pieces of level music, stitched together in different combinations. I would like to give some credit to Dennis and Henrik for combining the parts of the music in ways I would never have thought of. For me, the process of making the music became quite linear - one track leads to another, similar sounding track, that leads to another and so on. Even though we had established quite early that we were going to need a big variation between the parts - from really ambient to more driving techno/house drum patterns, to half time beats, straight, shuffled, 4/4, 12/8 and so on - it’s sometimes good to have someone other than yourself to make sense of what you’re doing, and rearrange things for you.

For the May update i made seven more pieces of music, and for the game modes update I made three versions to the theme music.

The early music sketches are available at my Soundcloud page, soundcloud.com/douglas-holmquist